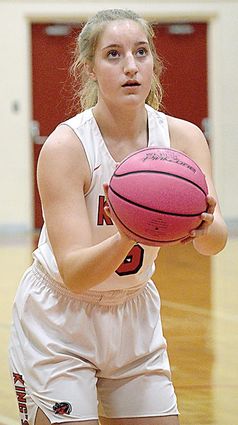 The Knights started off last week with a 49-36 victory over nonconference opponent North Kitsap and followed up with two wins over Cedar Park Christian (Bothell) and South Whidbey in North Sound Conference girls basketball play.

King’s (3-0 in the league, 12-2 overall) took a 17-7 lead into the second quarter and then pulled away from Cedar Park Christian with a dominant 22-5 second-quarter run.

The Knights were focused on keeping Cedar Park Christian’s Irena Korolenko in check. Korolenko led the Eagles (6-1, 12-5) with 16 points.

“We were able to get into a rhythm in the second quarter,” King’s coach Dan Taylor said.

The Knights have faced challenges this season with the loss of sophomore guard Jada Wynn, who was sidelined after suffering a concussion in practice. Wynn, a first-team, all-league standout, is out for the season for medical reasons.

Taylor needed players to take on expanded roles with Wynn’s absence, and he found two of them in senior forward Ashley Gray and junior guard Daylee Peterson.

Taylor admitted he had questions about Peterson, a standout soccer player, who he said knew the game and was a great teammate.

“She’s been able to do great things on both ends of the floor,” Taylor said of Peterson, who took on a starting role early in the season.

The graduation of Dominque Kirton and the transfer of her younger sister Jaydn Kirton left a void among King’s forwards. Though she’s only 5-foot-6, Gray is providing key minutes.

“She plays bigger than her height, inside and outside,” Taylor said. “Those two girls (Gray and Peterson) came in as question marks. They’ve erased all the questions. They’re now exclamation points. They’ve been impressive.”

King’s younger players also are contributing. The Knights have five freshmen and two sophomores on the varsity roster. 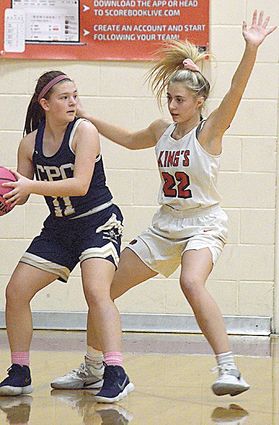 “We knew what we were going to get from some of the returners,” Taylor said. “The ones who didn’t’ get as much varsity minutes have been really remarkable.”

“I’m impressed by the young talent across the board.”

The Knights wrap up league play against Coupeville (4-1, 9-3) and Sultan (1-4, 4-9) and also face Cashmere, Sequim and Rainier Beach in nonconference contests.

Cashmere currently is No. 1 in the latest 1A RPI (Rating Percentage Index), while Sequim is No. 14 in the 2A RPI. The RPI is a statistical system used to rank teams across the state.

Taylor is looking for King’s to continue to work on executing better on offense and to work on conditioning and strength training in preparation for the postseason.